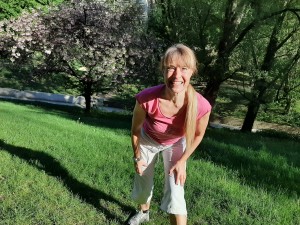 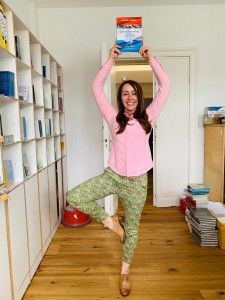 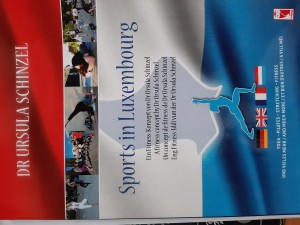 Please respond to the author, saying which is your favorite sports short story: ursula_schinzel@yahoo.com

Here are the responses by some of the lecturers, the first one by the name of C.:

Here the second story, by a lecturer called Manfred:

Her head was covered and biking goggles protected the eyes so I could see very little of the face, yet I saw the two rows of beautiful white teeth that were smiling at me. The petit figure was coming off the bikes, the goggles came off and a pair of almond eyes were staring at me. “My name is Maria Theresa” she said. I came off my bikes and introduced myself, “my name is Manfred”, explaining I was the new Yoga student. For over ten years I used to exercise with Lulu on Avenue Joseph Sax but they have then closed the studio and I was looking for another teacher. I have tried my luck in various studios but in none of them was I welcomed with such a big smile. Then and there I decided to stay. Over time I have found Maria to be a very energetic teacher, trying new positions and new exercises, while never losing her big smile. I was waiting for the whole day just to arrive to class in the evening to be with Maria. Yet, she had kept her lips pretty tight and I could not figure out whether she was involved in any relationship. Sometimes I noticed that she was arriving to class with another biker and I assumed he was her partner. One day Maria arrived in class alone, and then the next day it happened again, and this went on for the whole week. I managed to gain some courage and to approach her after class asking if she would join me for coffee at Bereler Stuff, a place on Route de Luxembourg which is a little out of the way and provides some privacy. She hesitated for a moment but then her big smile revealed her answer.  At that time I was married and I disclosed this fact to Maria in our first meeting, yet she did not seem to mind. She did not tell me much about herself but I have managed to get a promise from her that she would join me for a bike ride on the next Sunday. That Sunday, we biked through the Haard-black, a challenging route that goes through former open cast mining areas. Needless to say she sped up the difficult route without stopping for a breath. We spent the following Sundays biking on paved and unpaved roads, through forests and mountains, in and out of the City and into beautiful sunsets. We would concluded our rides in her home located on the roof of a building at the very end of rue Michel Rodange, doing Yoga while enjoying the view of the bridge at night, and you’d better believe it. I called these escapades “my Holy Sundays.” Meanwhile my divorce process had been completed and, after being married for 23 years, I felt like I was reborn, a free man. One day, and without any hint of what was coming, Maria had jokingly asked me how I would feel if I was married again. Even if I wanted to answer this question I could not think of any answer.  I smiled and elusively redirected the conversation. She never asked the question again but a month later, when I arrived in class I noticed that Maria was just getting off her bikes saying goodbye to a fellow biker. I did not pay much attention to this. A couple of days later the same thing happened again. I approached Maria after class and asked her who that person was. She gave me her big smile and said it was a secret.

I almost gave up, when a week later I received a message from Maria telling me her brother, who was on a visit to the City, returned to his village in Bavaria, and she was ready to resume our Sunday’s Yoga. Needless to say that after this minor ‘crisis’ our relations took off and we are currently talking about … (to be continued).